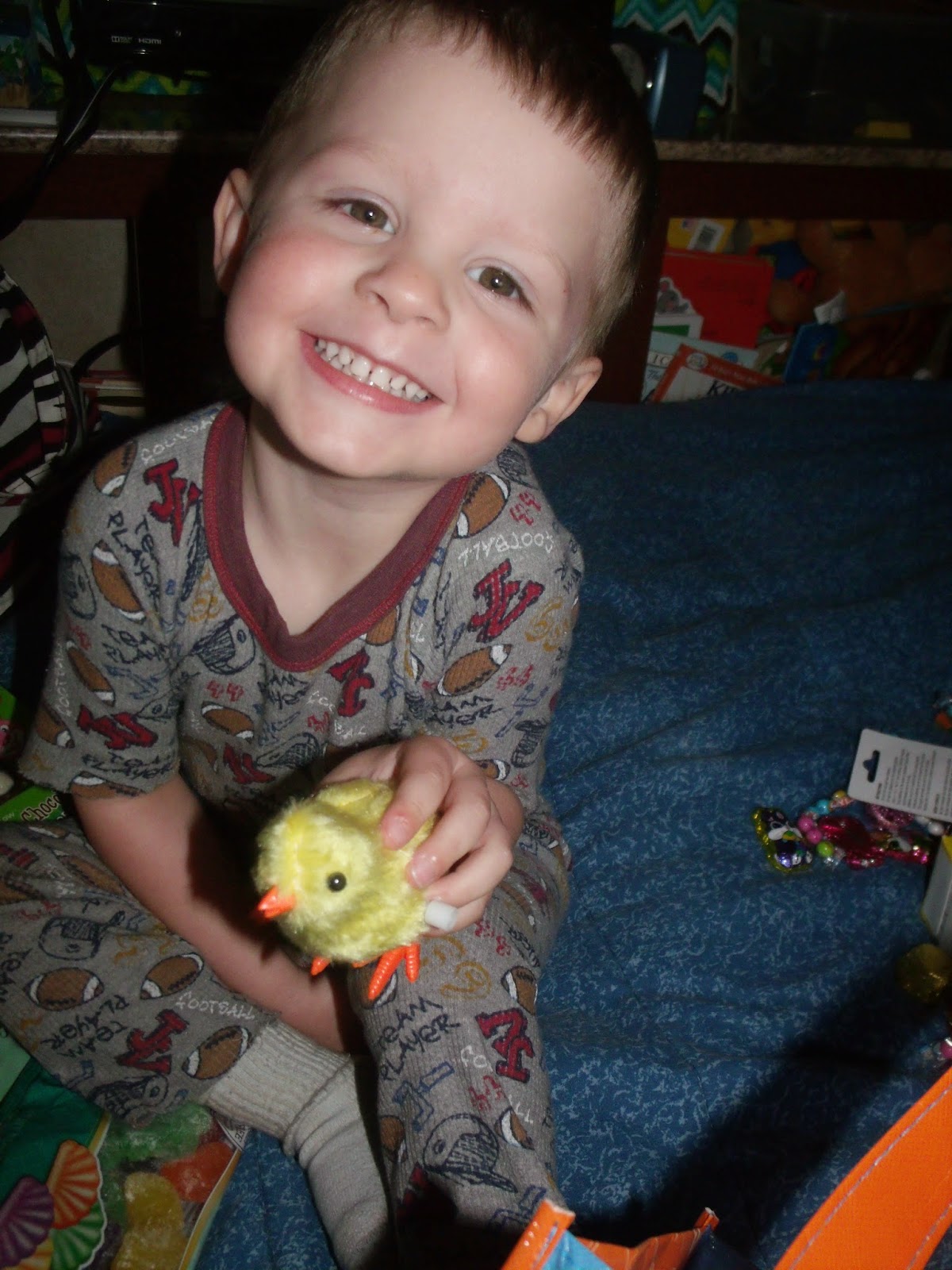 Hi everyone!!!! Sorry it's been a little while since I've gotten to post an update here. We've had a bit of bad luck going on, lol. Nothing terrible, though, it could definitely be much much worse.  =)  So here's an update....

I believe I had told you guys about the poor little starving, tick-covered, scared to death stray doggie that we were feeding in Jamestown, SC right? Well we finally got ahold of him a few days before we left. We pulled about 30-40 ticks off the poor guy and gave him a bath the best we could outside. We tied him up the day before leaving and decided to take him to a no-kill shelter on our way out of SC. We couldn't bare the thoughts of leaving him out in the woods, so far off the main road, with nothing to eat. Then I asked myself, "What does the DOG want? Does HE want to go to a shelter where he'll be given food and water and won't be lost in the woods? Or does he WANT to stay here for some reason?" So I untied him before bed that night and had a discussion with him (yes, I do think he understood me)- telling him if he wanted to go with us, he'd have to come to us easily the next morning before we headed out. If he did NOT want to go with us, he should keep his distance and not come to us. Morning came and he wouldn't come to us. I took that as him saying he wanted to stay there in the woods. That was until we started pulling out of our site and driving down the gravel/dirt road...he followed along behind us, whining. =(  We stopped and loaded him up in the back of the Xterra, and dropped him off at the nearest shelter. The ladies working at the shelter seemed to think he was a lost hunting dog and may have a chip implanted or if no chip, the owner would be looking for him. If he was a lost hunting dog, he was either lost in the woods for quite a while (considering he was all bones, covered in ticks, and scared of his own shadow) or his owner did NOT take very good care of him... But in any event, I just pray that he has ended up in a good loving home or will very very soon. He was a sweet little guy once you got ahold of him and gained his trust...

As I mentioned 2 posts ago (in the "Update..."  post), we had a lady rear-end us in Georgetown, SC on April 11th. Our Xterra just got some scuffs but the other vehicle had some damage- headlight, bumper, and fender. The driver ended up telling the insurance that WE backed into HER, instead of HER plowing into US when we were sitting still in the parking lot. Not to mention, her and her husband are now claiming injuries- even though no ambulance was called, they were both running around inside Little Ceasars after the cop left- like nothing had even happened, and they were a-ok until about 3 days after the accident. So needless to say, the insurance company had to do an "investigation" since our "stories" didn't match and the police report stated "no fault determined." We have spoken to SEVEN different insurance adjusters now, since the lady who hit us has the same insurance company that we have. Arrggg....   (I'll tell you the results of that here shortly. Hold tight!)

We made it to Peletier, NC on April 14th- the trip went pretty smoothly, no mishaps or anything exciting to report. It did take us quite a bit longer to get here than we had anticipated, since our new GPS is proving to be a piece of crap, and took us to the OPPOSITE side of the White Oak River, to someone's house...ugh...lol. The weather was pretty yucky until this past Monday (the 21st), which pretty much sucked since we're only about 10 minutes from the beach at Emerald Isle, NC. We had lots of rain, high winds, etc. (It has been really nice since this past Monday, though, thank goodness.)

Our generator that we just bought before leaving WV all of a sudden stopped working on Friday the 18th. Dale messed with it for 3 days, couldn't figure out what the heck was wrong. We took it back to Sears and, of course, they said they would have to send it off for repair- which would take 1-2 weeks. We haven't decided for sure how long we want to stay here in Peletier, so we figured we should hold off on the repair for a bit. We have to run our generator for 1  1/2 - 2 hours each day to re-charge our camper battery, so we HAVE to have a generator. We decided to go pick up a smaller cheaper one to use until we could get the old one fixed, so we did that this past Monday (the 21st)  (More about this story shortly, as well.)

I ended up maxing my data out for the month on my mobile internet (jetpack) a few days before it renewed. That's why I haven't been able to post here on the blog lately, lol. It has now renewed, though, so hopefully I can make it a full month without maxing it out this time. =)

This past Monday (the 21st) we drove to Morehead City, NC to find a new generator.  We went to WalMart and found one that would meet our needs until our other one could be repaired, but decided to go check out Lowes first just in case they had something we liked better. We went to Lowes and all they had was huge ones, way bigger and heavier than we wanted. So back to WalMart we went. After buying the generator and pulling out of the WalMart parking lot, I spotted an older homeless guy sitting on the ground with his dog. He was sitting at the entrance/exit of WalMart and was holding a sign that said, "Homeless. Looking for work. God Bless You!"  I asked Dale if we could go to another store nearby and pick up a few things for the guy and his dog, and of course he agreed. I quickly ran in and picked up a few things- some canned soup with pop top, plastic spoons, a nice cold bottle of water, a cracker & chicken salad snack kit, a box of granola bars, a small bag of dog food, and a pouch of doggy bacon treats. We headed back to WalMart, praying the guy was still there. He was. Dale and Aidan stayed in the Xterra, parked in a restaurant parking lot next to WalMart, while I ran the goodie bag over to the guy. I'm not going to mention his name, but I will say that his adorable, smart, and faithful little dog's name is Pearl. He lives in a tent in the woods, along with a few other homeless men. He also carves wooden canes in the woods, and sells them when he can. He and Pearl were both very nice, friendly, and grateful for the goodies. I spent several minutes chatting with the gentleman and petting Pearl. He thanked and God blessed me more times than I can count, and even gave me a hug before I left. I admire that he wasn't asking for hand-outs, he was simply asking for work. He didn't smell like alcohol or tobacco, and he was extremely grateful for the help. I can honestly say that I enjoyed chatting with him and it felt amazingly wonderful to be helping him, even if it wasn't really that much. I wish I could have done more for him...

Galatians 6:9 states "And let us not grow weary of doing good, for in due season we will reap, if we do not give up."  In this case, we reaped very quickly. That very same evening we opened up the new generator and pulled out the manual. Dale quickly noticed that it requires a minimum of 90 octane gasoline...we only had 87, since that's what our other one takes. Rather than having to run back out to the gas station to buy some 90 octane, something (or someone) told him to mess with our old one, one last time. It fired right up and has been working fine ever since! So now we can take the new one back to WalMart and get our money back, since we never used it. Woo hoo!!! About 15 minutes after the generator had been running, our cell phone rang. It was our insurance company. They had completed their investigation and had made a decision. Since they could find no witnesses and no proof to prove either of our stories of what happened, they had decided to accept liability for our vehicle repairs and make the other lady accept liability for hers- meaning our policy pays for ours and her policy pays for hers. After 1 selfless good deed, God rewarded us by mysteriously making our generator start working (after Dale had spent 3 days working on it, to no avail.) , he helped the insurance company come to an acceptable decision (with us not being held liable for the other lady's repair costs and "injuries" to her and her husband.), AND the weather has been beautiful ever since. Thank you Jesus! =)

Now that you have read my novel in it's entirety, lol, here are some pictures for you to enjoy. =) More to come in a day or 2. Talk to you soon!!!

"Collect moments, not things."
If you are unable to view the slideshow above, simply click HERE! P.S. Please take a moment to comment on this post and SHARE it! To share, just click on the red "share" button below or look for the gray facebook/email/pinterest/twitter/etc icons below (depending on what type of device you're on.) Thank you so very much for your support!!! =)
Posted by Unknown at 9:50 PM

Email ThisBlogThis!Share to TwitterShare to FacebookShare to Pinterest
Labels: Our Life <3