It's beginning to look a lot like...HALLOWEEN! 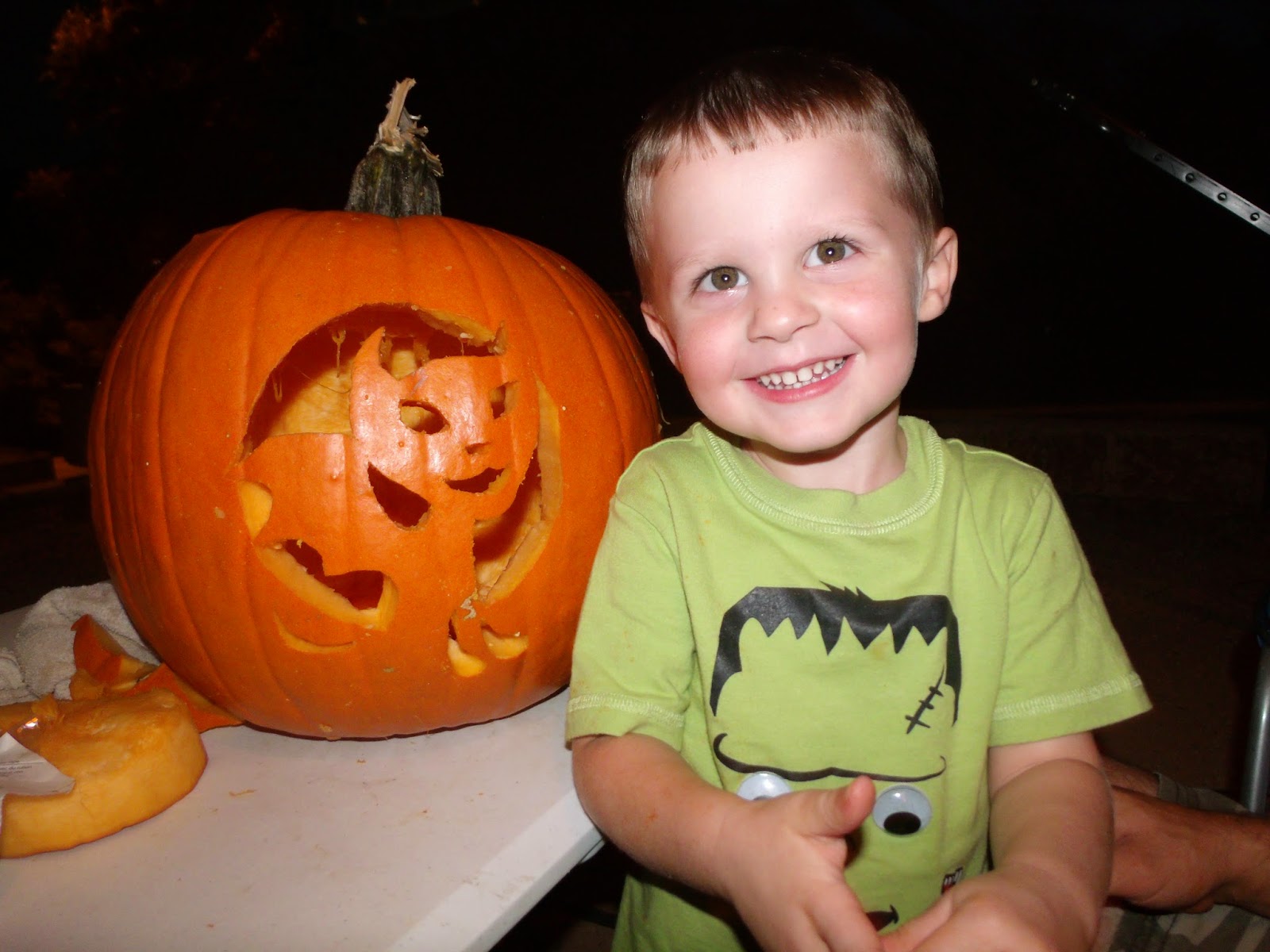 Hi guys! Sorry for the delay, my internet isn't too reliable here in TX! I just wanted to hop on for a few and catch you guys up! =)

We went to the Marble Falls City-Wide Garage Sale on Saturday and found a few goodies. Then we went to Sweet Berry Farm (also in Marble Falls) and let Aidan pick out his pumpkin. He chose a 24 pounder and refused to let us carry it up to the counter for him. Instead, he insisted on rolling it through the field all the way up to the counter by himself, lol. Stinker. ;)

After looking through the pattern book, Aidan decided he wanted to carve a bat-cat into his pumpkin. Every year he has a different reaction to removing the pulp from his pumpkin, LOL. This year, as you can tell in the pictures- he wasn't too into the yucky stuff, bahaha. We wanted to google ideas for preserving pumpkins to make them last longer, so the first night we kept the pumpkin inside the camper with us. The second night, however, we decided to sit it outside at the end of our camp site- next to the Xterra....biiiiiiiigggg mistake, lol... We woke up the next morning to find that a hungry deer (or a few of them) had eaten the entire front off the pumpkin, lol. No more bat-cat... I had Dale toss the pumpkin remains into the dumpster in hopes that Aidan wouldn't notice. Thank goodness, he has yet to notice that the pumpkin is missing, lol. Hopefully it stays that way....If he does notice, we'll just get him another one and make another attempt at it, lol...crazy deer, haha...

We had a great evening on....Monday night, I believe? helping our friend Craig celebrate his birthday with our wonderful boss/friend and their lovely friends Jon Paul and Diana. We have met some of the nicest and friendliest folks here in Texas! =)  Jon Paul and Diana ended up giving Aidan his first pair of REAL binoculars- so now he can see his turtles, ducks, fish, and the moon even better. (Then yesterday they stopped by to bring Aidan a water-gliding airplane they had bought him. Such nice people!)

This-coming weekend we will be attending the Fort Croghan Day festival and we haven't decided what else we'll do yet. =)  Whatever we decide, I'm sure I'll be taking plenty of pictures to share with you guys next week. ;)

To check out the pictures we've taken since my last blog post, see the BURNET, TX (OCT. 2014) album and the MARBLE FALLS, TX album.  =)


"If there's something you want to do, DO IT! There's only so many tomorrows."


P.S. Please take a moment to comment on this post and SHARE it! To share, just click on the red "share" button below or look for the gray facebook/email/pinterest/twitter/etc icons below (depending on what type of device you're on.) Thank you so very much for your support!!! =)
Posted by Unknown at 10:16 PM

Email ThisBlogThis!Share to TwitterShare to FacebookShare to Pinterest
Labels: Our Life <3